The aim of the 42126 Ford Raptor was to motorize the set with as few additional pieces as possible while preserving all the functionality and looks.  For motorization I used a single BuWizz 3.0 Pro brick, two BuWizz Motors and a PU Large motor. 2. Redesigning and motorizing the rear axle

The rear wheel drive went through several designs before I reached a solution that is simple, yet robust enough to cope with the power of two BuWizz Motors.

The first design used the original differential and universal joints but it had the following issues:

After several additional attempts I decided to remove the rear differential altogether and attach the drive motors directly to the rear axle.

This setup offers the following advantages: 3. Finishing up the modification

This position offers the following advantages: 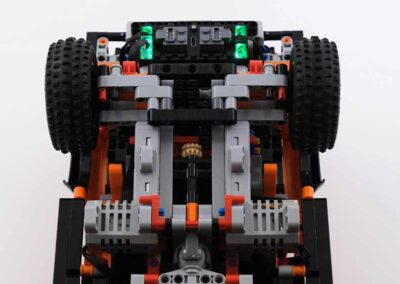 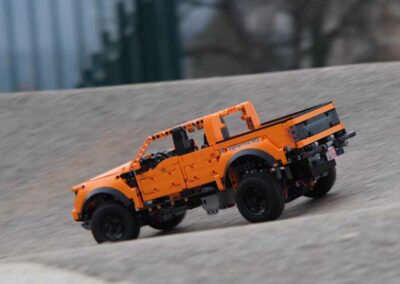 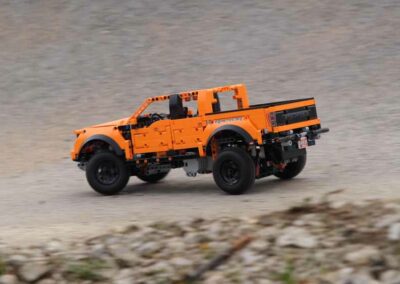 With this modification we succeeded in motorizing the set with only 3 additional parts while keeping the original looks, both exterior and interior. The model is now capable of driving  quickly and reliably over rough terrain. For those interested in modifying their own 42126 set we prepared PDF instructions for motorization and the control profile which you can find here: For this model, the plan was not to aim for high speed but to modify it in a way to be able to power slide and drift.
This model also served as a test bench of the 3D printed BuWizz motor casings and BuWizz 3.0 production Pro hardware.

This model is the fastest 1:8 scale model, and of LEGO bricks, on the planet. It can reach a whopping 36,5 km/h.
GTA Spano MOC uses 10 BuWizz motors for propulsion and 5 BuWizz 3.0 Pro controllers.

This creation is out of this world. it looks like it is prepared for a MARS mission.
Alexander is a real-life Auto designer and fortunately for us, he loves to test his ideas with LEGO®.

If you are from Greece, you probably own a boat. LEGO® Technic builder Andreas had an amazing idea for an adventure.
He inflated his boat, through away his paddles, and made a Motor from bricks.

Lachlan is one of the most recognised builders of Supercars. His collection of building instructions are phenomenal. But his pride and joy is this MOC: Ferrari F12.
Check out what he said about the build...

BuWizz #stayathome competition had some cool models, but one was very interesting. For all those who love Star Wars, the name is familiar. His bike isn't. This is a story about Boba Fett.