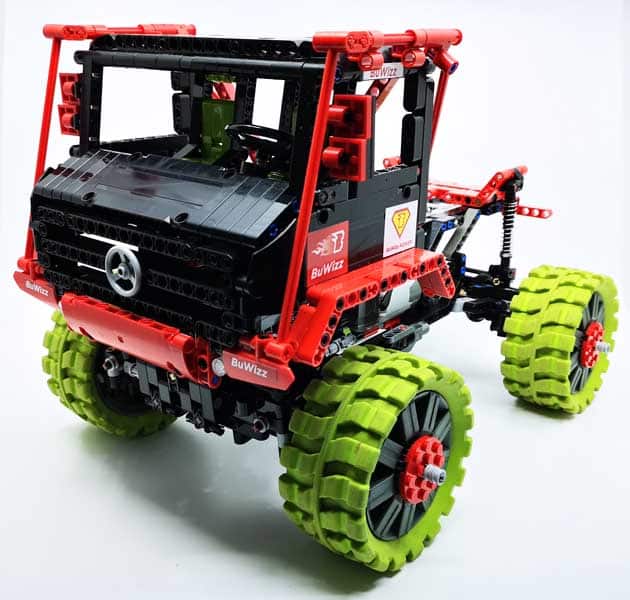 It was late in the evening when I packed up the last model into my travel case. Tomorrow I was flying to Bucharest to attend the upcoming Rolug Technic Xpereince 2018.

The two weeks leading to the competition were dedicated to building, testing and optimizing the three competing models, each for their own respected category: Truck trial, Off road and Microracers. With addition of Boats, Sportscars and Battle bots, there were a total of six categories, but due to the constraints in luggage space and lack of large enough boat hulls I had to settle on just three.

Work started on the most difficult category first – the Truck trial. I’ve made a rough design prototype in Lego Digital Designer before starting the physical build of the chassis.

Having built the chassis I immediately discovered multiple issues related with the gearbox and drive gears slipping under the immense torque produced by two XL motors powered by BuWizz. With no solution capable of correcting the issues, this design was scrapped and I returned back to the drawing board.

Unlike the previous off-roaders, where there were no limits and design constraints, the rules for Rolug Truck Trial stated that maximum of 4 motors can be used, the truck needed a working steering wheel, a fake piston engine and had to 50% resemble a real machine.

After tinkering with the various designs, I decided to try an approach with two live axles with independent left and right wheel side drives, which will allow for better cornering, elimination of drive torque flex on suspension and extra redundancy.

In order to contain the massive torque produced by the XL motors, each independent drive train was geared up 3 times, transferred to the live axles via U joints and then geared down 9 times. This gave the model a final gear ratio of 3:1 from the dual XL motors.

The dual motors also power the fake piston V6 engine located in the front via a pair of 24 tooth clutch gears. It was very important to use the clutch gears since they allowed for the speed differences between left and right wheel drive in the corners.

For the steering, I decided to use a servo motor, as it allows the most precise and easy control. The servo motor was placed directly on the front axle to minimize any slack in the steering system and to with weight distribution. Since the model also required a working steering wheel, a link was connected to the steering rack which would swivel a steering wheel inside the cabin.

With the chassis completed and successfully tested in the Ludicrous mode it was time to start on the body. Since the suspension, axle design and proportions matched a Unimog the best, I looked up reference photos and decided on the following real-life truck:

Since the rules required me to use only three main colours, I made the cabin black with red accents and lime coloured seats. Using the reference I designed a cab with two seats, mudguards, massive bumper, external roll cage and other details. The finished body was decorated with BuWizz labels to give it more of a competitive spirit.

You can watch the video of the finished Truck trial Unimog here:

For the Off-road competition, we had to design a model which will be able to negotiate rough terrain in a fast and controlled manner. Rules for this category were less strict than Trial Trucks. The most important being the there motors limit and that the model has to be powered by the Power Functions AA battery box.

Work began with the front axle in Lego Digital Designer. The idea was to use the extra hard shock absorbers to give the model a very soft suspension with a very long suspension travel. Independent suspension in front uses a double wishbone setup, while the rear uses a solid axle design.

The front axle was designed with a slight caster angle which keeps the centred and also increases the sensitivity of suspension. The rear axle incorporates two L motors coupled directly to the drive wheels via bearings. The bearings keep the wheels attached firmly to the axle and carry the weight, while the central axle transmits the power from the motor to the wheel. This design allows for a very high efficient transfer of power from motors to the wheels while being light and robust.

Happy with the digital design, work began on the real chassis. The original plan was to use 81,6 mm Tumbler wheels and tires, but they were soon replaced with larger 107mm wheels and tires which allowed for higher top speed and more ground clearance. Chassis uses multiple frames and diagonal beams for maximum strength and low weight.

Test of the chassis showed suspension system to be one of my most responsive designs so far, with suspension travel in

front at around 7cm and over 10cm in the back.  After a successful test of the chassis, it was time to build the bodywork. The only limitations here were that it had to resemble 50%  a real machine and that it can use a maximum of three main colours.

For colors, I chose dark azure, orange and a bit of black in order to create very visible bodywork. Final touches included exhausts in the rear, light bar on the top of the roof, white edged rims from 41999 and BuWizz stickers.

You can find a video of the finished Off road trophy truck here:

Mircroracers was an interesting kind of a challenge, where the volume of the model was limited to 1600 cubic centimetres  This meant that the model had to be as compact as possible, while still performing as best as possible. In order to avoid complex gearboxes, I decided to use the Power Functions train motor as the main drive motor. The train motor drives the rear wheel directly, thereby avoiding gears which reduce efficiency.

Originally a servo motor was planned for the steering.  But due to the space constraints and slow reaction time of the servo an M motor with a centering mechanism was used instead. To increase the responsiveness of the steering system the M motor was geared up. The white rubber band provides the needed centering force.

In order to fit all the needed components in the required volume, steering motor and Buwizz were positioned at the sides, while the drive motor was placed directly behind them. Completed chassis was measured and tested before continuing with the bodywork.

Due to the long wheelbase and different size of the front and rear wheels, I decided to model the model after a funny car. These cars are used for drag races and are one of the most powerful machines ever created.

The finished model was created in a combination of azure, black and red highlights. For the finishing touches, the racer was equipped with an engine blower, exhaust and a rear spoiler. And of course, BuWizz stickers were added for sports livery.

You can watch the finished Microracer funny car here: https://www.youtube.com/watch?v=UB5OjgelXTs