Towing a Porsche Macan with LEGO® and BuWizz 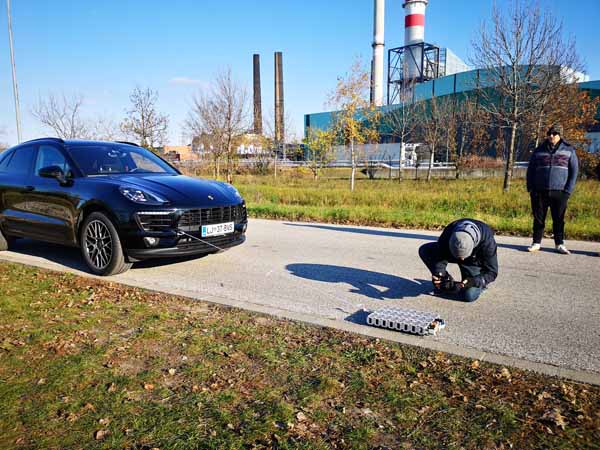 We got the idea to pull a car with Lego at the BuWizz picnic which was held back in June. At first we tried pulling a car with the 16×16 truck, but it proved too light.

Even with logs used as an additional weight, the truck simply lacked the traction needed to pull the car.

We went to the drawing board and came up with the following requirements for the design of the puller:

– Whole model has to be modular, so it’s easy to assemble and repair if needed

– Everything will be powered by a single BuWizz

First step was finding the way to generate the needed torque in the most reliable and compact way possible. Worm gears were chosen for this purpose. While they are not as efficient as normal straight gears, they provide very high gear ratio with a very low amount of needed parts.

Next step was to choose the wheels. In order to reduce the strain on the drive axles, they had to be as small as possible. They also need to be able to support a lot of weight without deforming or tires separating from the wheels. After a bit of experimenting 37×22 tires and wheels were chosen.

Gearbox and wheels were reinforced with 5×7 frames to form a module:

A total of 24 of these modules were used to complete the transporter:

With the model digitally perfected, it was time to build the real thing. Following a few Bricklink orders almost 2500 bricks waited to be assembled.

After a day of heavy building it was time to test the carrying capacity of the transporter .For this purpose the transporter was ran under normal Power Functions power while carrying the weight of its designer and builder. The test passed successfully without issues.

Transporter was equipped with BuWizz, decorated and prepared for the first car pull.

For first car pull test we used a Hyundai Getz, which weighs around 1200 kilograms.

The test also proved successful with the puller being able to pull the car without issues. After test we decided to lubricate all the moving parts with silicone-based lubricant in order to reduce the wear on the parts and to increase the efficiency of the puller.

We contacted RacingBrick and agreed on performing a videoshoot of the puller pulling a 2 ton Porsche Macan in industrial area of the Budapest.

We departed Slovenia on the 27th of November on a 4 hour drive to Budapest. At the arrival we started with unpacking and preparation for the shoot. We let Balázs (RacingBrick) did most of the shooting process, since he had the best tools and experiences needed for the job.

We wrapped up the successful shoot with a quick race, big dinner and a bit of sightseeing.

For more from behind the scenes please check out the following video: