BuWizz Gokart made from LEGO® bricks The go-kart is one of the BuWizz’s team most ambitious projects.
To build it, it took over 7000 Lego pieces, 32 L motors, 8 BuWizz bricks, one BuWizz app update and hundreds of man-hours. The final build, can easily drive a 60kg person with the top speed of 4km/h.

The story of the go-kart starts right after finishing the video shoot of pulling the train card with the heavy transporter. The heavy transporter showed us that Lego pieces have the needed strength to carry and transport the weight of a person, albeit in that case quite slowly.

So I got an idea to create a carrier that would use a higher amount of motors than the heavy transporter and have a higher speed.

Unlike the 24 small wheels the transporter used, the new model would only use 4 wheels based on the Technic Gear rack 11 x 11 Curved.

Work first began on the wheels. They had to be capable of carrying a total weight of around 60 kilograms. When dealing with such heavyweights and forces, the only way to succeed is to distribute the load over a high amount of bricks.

In this case, the wheels were designed with multiple parallel rings, each carrying part of the weight: 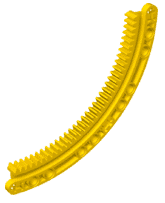 The rings would be stacked onto each other to form the finished wheel: 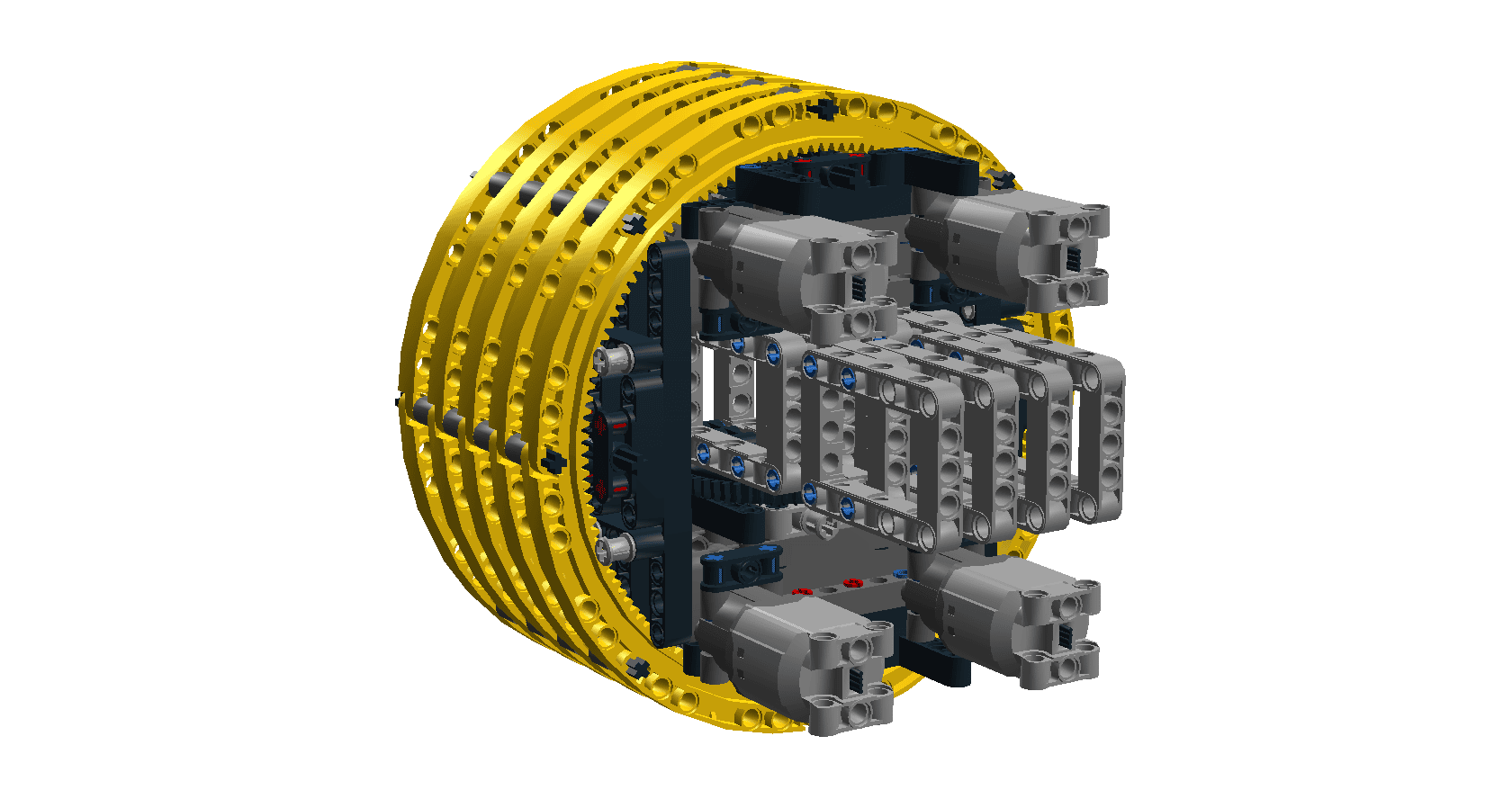 Each wheel is powered by a total of 8 L motors through a gearbox. The original idea was to gear the 8 L motors up 3x times using a combination of 24 and 8 tooth gears. But after testing the wheels I soon realized that we will need a lower gear ratio, so a combination of 20 and 12 tooth gears was used to gear up the motors by a factor of 1,67. The resulting gearing gave each wheel a top speed of around 4 km/h

The wheels were further optimized during testing to use clutch 20 tooth gears as the main weight-bearing wheels instead of the original 12 tooth gears.

This change helped the wheels to spin more even and it allowed the load-carrying axle to be stationary, reducing wear and tear.

With the wheels finished, it was time to build the frame of the go-kart. The frame is based on two main pieces, a 1×15 Technic beam and 7×5 Technic frame.

The 7×5 frames are crucial to the rigidity of the frame, while the beams connect them all together. Of course there were also thousands of pins used to attach everything together.

With the help of Lego Digital Designer I created the first sketch of the go-kart’s frame: With the virtual model created, I now had an estimate of the needed parts. With that information, I started looking for the cheapest deals on Bricklink, updating the digital model was I got along. Red beams turned out to be the cheapest solution, and we ended up ordering around 850 of them. Total number of parts ended up at around 7000-8000 with over half of them being pins.

Once the ordered parts were received, it was time to build the massive model:

During the assembly process, the frame and model have been further improved and reinforced in order to carry my own weight without excessive bending. The wheel rims were covered with adhesive window rubber insulation to add grip.

The rear axle was flipped 90 degrees in order to increase its rigidity and the whole kart was split into several modules for easy assembly and maintenance. In fact the whole cart can be taken apart to a couple of modules and assembled in less than 10 minutes:

With all the mechanical problems solved, it was time to turn attention to the control of the model. Since each wheel uses a total of 2 BuWizz bricks, the whole model used a total of 8 BuWizz bricks. This resulted in a problem with control, since Android based phones can connect to a maximum of 7 Bluetooth devices at once.

We decided to try to use an Apple based device to see if we can connect to 8 BuWizz bricks at once. There were no issues, so a simple iPhone 5 was chosen for the main controller. The phone was integrated into the steering wheel.

The control device also had to compensate for the difference of motor speeds when taking a corner. Due to the load on the wheels, a simple sharp turn could cause them to fail if we would not slow the inner wheels down when turning.

We asked our app developer to add a simple gyroscopic command to the app, which we then used as an input for our tracked steer mixer. I experimented with different mixer steering ratios and in the end settling with the factor 0.1.

Now that our go-cart was fully functional, it was time to head outside to give it a final test run in the real world and the record the following video: